Pergamum (or Pergamon) was a Greek city situated some 26km (16 miles) from the western coast of Anatolia (modern Turkey). 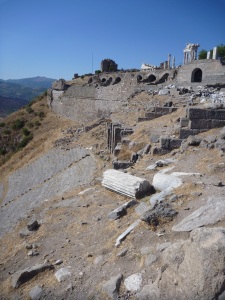 Like many sites from antiquity, the city’s origins remain shrouded in myth. The first mention of it is in 399BC, when it appears in the Anabasis of Xenophon. Then, though, it appears to have been little more than moderately-sized polis well-situated near the river Caicus.

It wasn’t until after the death of Alexander the Great in 323BC, and its incorporation into the territories of his former lieutenant, now King of Thrace, Lysimachus in 301BC (after the Battle of Ipsus) that it had the chance to expand and become a true metropolis.

Under the stewardship of Philetaerus the city prospered. Then, in 281BC the decisive Battle of Corupedium was fought between Lysimachus and Seleucus, the two aged veterans of Alexander’s wars, now kings in their own right, fighting one last battle on the plains of Lydia.

Lysimachus died, his kingdom collapsed, and Philetaerus, seeing an opportunity amidst the chaos that ensued, seized control of Pergamum and established his own dynasty.

The Kings of Pergamum – the Attalids – ruled the city and the surrounding territories for over 150 years.

Although nominally under Seleucid control at the beginning, Pergamum quickly established itself as an independent force in the region and amassed both great wealth and prestige. Through canny diplomatic manoeuvring and astute forethought, the Attalids managed to weather the many wars of the Hellenistic period and eventually allied themselves with the emerging power of Rome.

Thanks to this, they eventually found themselves in possession of vast territories seized after the defeat of the Seleucids by the Romans, and the city itself, now the capital of a veritable empire, was expanded to accommodate its new importance.

In 133BC, having no heirs and wishing to avoid the bloodletting that an uncertain succession would inevitably unleash, Attalus III bequeathed Pergamum and its territories to the Roman Republic, an unprecedented move that ensured the survival of the city and its inhabitants well into the future.

Today, Pergamum is a ruin situated on a hill – a site for keen tourists. The remains of some of its former structures were removed by European archaeologists during the time of the Ottoman Empire, but what remains is still glorious to behold.

Having been there myself, in 2011, I can tell you that despite having “ruin fatigue” from seeing so many ancient sites in such a small amount of time, I was truly awed by Pergamum, a city with a story not tragic, but glorious.

Ethan Reilly is an author and blogger who lives in Brisbane, Australia. Did he mention he blogs?
View all posts by ethanreilly →
This entry was posted in History and tagged Alexander the Great, Attalids, Attalus, Attalus III, Battle of Corupedium, Battle of Ipsus, Diadochi, History, Lysimachus, Pergamon, Pergamum, Philetaerus, Roman Republic, Selecus. Bookmark the permalink.